I just came back from a fabulous trip to Wales where 5 friends, two dogs and I were tracking down some Merlin filming locations. Some of you will remember the Merlin dog from Pierrefonds (right), the other one on the left is his son Arthur! ;) By the way, Merlin's wife is called Freya, and their daughter, Arthur's sister, is called Morgana, but they had to stay at home.

(Picture taken in front of the "Blue Pool", Fforest Fawr)

We had an amazing time with very sunny weather and loads of fun walking down the very same paths on which Colin, Bradley and all the others walked before us. Thanks to

pakafe we were able to find every single location on our list (which wasn't complete by far, but it was a start... we'll definitely have to go back there ^^).

We've rent two lovely cottages near Pendoylan in the Vale of Glamorgan, a bit west of Cardiff, which I'd highly recommend as a starting point for everything in South Wales and it's also not too far to go to the Forest of Dean and its surroundings (in case someone's interested, this is their website).

I won't write long and detailed reports (you know me! ^^), because I think the pictures will speak for themselves. :D So, be prepared for some heavy picture posts these next few days/weeks (depends on how fast I'll sort out the 2200+ pictures I took *lol*). Whenever possible, I'll provide a screenshot to show how the location was used in the series. I didn't always get the angle right, but hopefully it will be clear. ;)
There'll be also one or two more general post(s) with pictures of the beautiful Welsh countryside, but for now let's start with the Merlin locations...

On our first day (7th July) we visited the River Ely, Castell Coch, the Blue Pool (which we coincidentally discovered right before

merlinlocations posted about it here ;))  and the Three Bears Caves.

You can clearly see, that they copied some of the towers to let it appear bigger ^^ 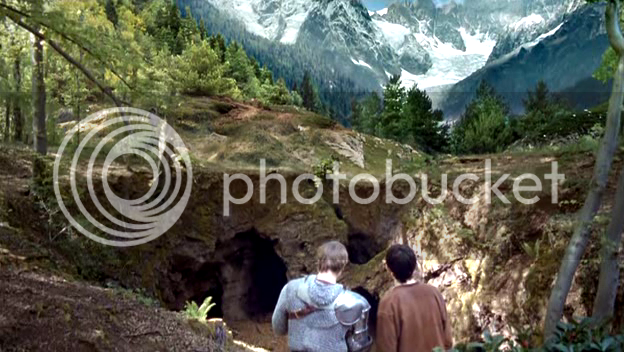