Most of you know, that after the nightmare that was Asylum 3 (you can read my German report of that disaster convention here), I had sworn to myself to never do a Rogue Events con again... but then they announced Wentworth Miller and Dominic Purcell for the City of Heroes 3 convention in Telford, UK. And everyone, who knows me and my current obsessions just even a little bit, may understand why all my intents vanished into thin air and I had to buy a ticket. I mean, Captain Cold and Heatwave! Michael Scofield and Lincoln Burrows! Together on stage! Pictures with them! Autographs and maybe a little chat... how could I not? *lol*

But believe me, the Asylum 3 was always in the back of my mind, all these months before COH3, and I honestly expected the worst when I went to Telford in May. I just hoped that at least the photos with Wentworth and Dominic would turn out kind of okay, because they were, well, let's say... not cheap. I had bought other photo ops as well, but because they were reasonably priced, I wasn't too concerned about them. I had bought an autograph ticket for Wentworth as well, but not for Dominic because it wasn't available online. And for the other COH3 guests six free autograph tickets were included in my entry ticket - unfortunately I couldn't use those for the Telford Fanzone guests, an event hosted simultaneously by the same organiser. For those autographs I would've had to pay extra, which was kinda annoying, because of my six free autograph tickets I only used four in the end. There weren't just enough interesting guest at COH3 for me.

So, on 19th May I went to the Telford International Centre to register and get the last autograph I needed. And would you believe...? It took me only two hours to do that. :P
20 minutes for registration were fair enough, but over 1 1/2 hours to get my pre-booked, pre-paid photo ops and that one autograph ticket was just annoying. There were maybe 30-40 people in front of me, but they had to check and tick off every single order with order no. and what it actually was. And then there were two other queues... one for stuff you actually wanted to buy in that moment (I was lucky that I could give

yavannauk the money for Dominic's autograph and that she bought it for me) and one queue for everything that went with the cancellation of a few guests and the refund of things. But for a seasoned convention-goer like me that's the time to meet new people and just chat away. ;) So, in the end it wasn't too bad and there were no pressing matters I had to do unlike at Asylum 3. After

yavannauk and I had all we got and were registered successfully, we treated ourselves to a nice early dinner. :)

I had planned to do all the photo ops on Saturday and all the autographs on Sunday, so I had time to go to several talks over the weekend and also to make sure I had my pictures of Wentworth and Dominic ready to be signed. Of course, not everything went according to plan... did you really think it would? *lol* But to say this right away, it wasn't as horrible as I expected. They had their timing mostly under control, running late for 15-30 minutes at certain times is nothing. I think they only miscalculated the time they would need getting everyone through the photo shoots with Wentworth and Dominic. I had three photo ops for them (a single each for Wentworth and Dominic, and a duo with both of them). First up was the single photo shoot with Wentworth, then - and I had to queue again for that - the duo photo shoot with both of them, and then... well, their 45 minute time slot was up! So, there was another photo shoot with Dominic scheduled for the afternoon, which screwed up my
other plans a bit. But I got everything done. I was only worrying a bit when they rushed us frantically through Dominic's photo shoot. The photographer never even checked if the picture was okay... bad memories of Asylum 3 surfaced again, but thankfully my fears were unfounded. In fact, I like the picture with Dom the best of those three. ;)

Well, I think I talked long enough... let's have some pictures. :D I made some collages of the pictures I took at the talks. Unfortunately the lighting wasn't great and from a distance with no flash it's quite difficult to take good pictures. So, don't expect much. ;) And please, don't ask me what they were talking about... I couldn't remember this stuff if my life depended on it. *lol* The only thing I can remember is, that Wentworth said Captain Cold will be back for The Flash (season 4) and Legends of Tomorrow (season 3), and that - maybe! - there could be more of Prison Break if they were really able to make it as good as this season.

I will just say this: All the guests I saw at the talks were lovely and funny, had lots of interesting stories to tell (I just wished I could recall them *sighs*) and it seemed they enjoyed themselves as much as we did. ♥ Rose McIver, David Anders and Rahul Kohli from iZombie. Rose and David were also on Once Upon a Time, and Rahul just recently had a guest role on Supergirl. Brit Morgan, David Harewood and Jeremy Jordan from Supergirl. It was actually David's first convention, but you wouldn't have guessed it. He was very lovely and relaxed. ;) Well, no captions needed, I guess... ;)
Dominic is a bit like the characters he plays, he just doesn't talk too much. ;) And Wentworth has a lot of very insightful things to say (that I can remember, just not what exactly *lol*) and he's really able to laugh about himself, but both of them seemed a bit... distant? Introverted? I'm not sure which word to use to describe the feeling I got while watching them. Nonetheless, they were both lovely on stage and I enjoyed their talks very much. ♥ (Although Wentworth's glasses were just awful! *lol*) Rick Cosnett and John Wesley Shipp from The Flash. And I put them last, because they actually became my highlights - my heroes - of the entire con. They were funny and engaging and had such great chemistry on stage, you just felt the joy and fun they had! With the second panel on Sunday they were even standing up all the time, which really showed the appreciation and respect they have for their fans (at least that's how it felt to me). These two very lovable and quite handsome men just stole my heart that weekend! ♥

And now, before I continue with my personal pictures, I've got to tell you the only negative thing I experienced at the con. And alas, it has everything to do with Wentworth and Dominic, and not with the organiser. In the beginning I told you I wanted them to sign my pictures with them, but I never did that. In fact, I swapped my autograph tickets for more pictures with Rick and John. And I'm so glad I did!
And here is why: At the end of the first day, I first learned that Wentworth and Dominic both didn't personalise autographs, which is annoying enough when you pay such an amount of money, but they also barely talked to people. I was told you were lucky if they even looked at you, let alone said 'hi' at all. So, it seemed they either didn't like to interact with the fans, were bored or maybe both. Although I think it wasn't so bad when I had my pictures taken with them, on the other hand I couldn't really tell, because everything went far too quickly.
Anyway, I then learned that they kinda synchronised their signatures, so they looked almost the same. I don't know if this was kind of an inside joke to them, or if they really weren't able to do it otherwise. I did a little bit of research on the subject and it seems that Wentworth's signature actually changed from a recognisable signature to some kind of a scribble that resembles a "W" in the last few years, but Dominic's signature was mostly distinguishable from that and with a bit of imagination you could read his name. I found this picture with their autographs on Ebay, to give you an idea of what I saw at the con when people showed me their autographs: 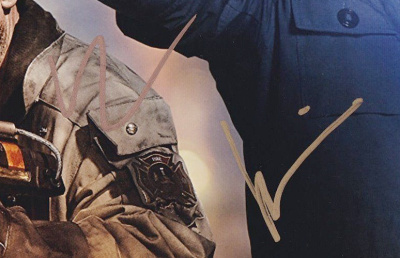 I'm sorry, but I refuse to pay £65 for two scribbles with no personalisation, no chat, no nothing... and I think it just would've ruined my pictures I took with them. So, that's the reason why there're no autographs on the photos with Wentworth and Dominic. But don't worry, what I got instead was sooooo much better!!! :D You'll see!

And now, finally, my pictures! *lol* (They aren't scanned, I just took pictures, so in reality the colours are a bit different and there're certainly no reflections of myself on the pics! *lol*) 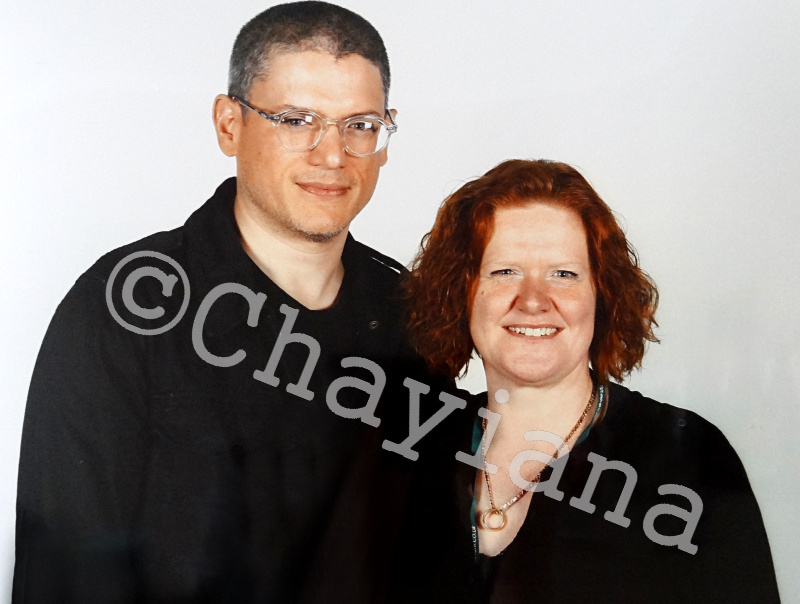 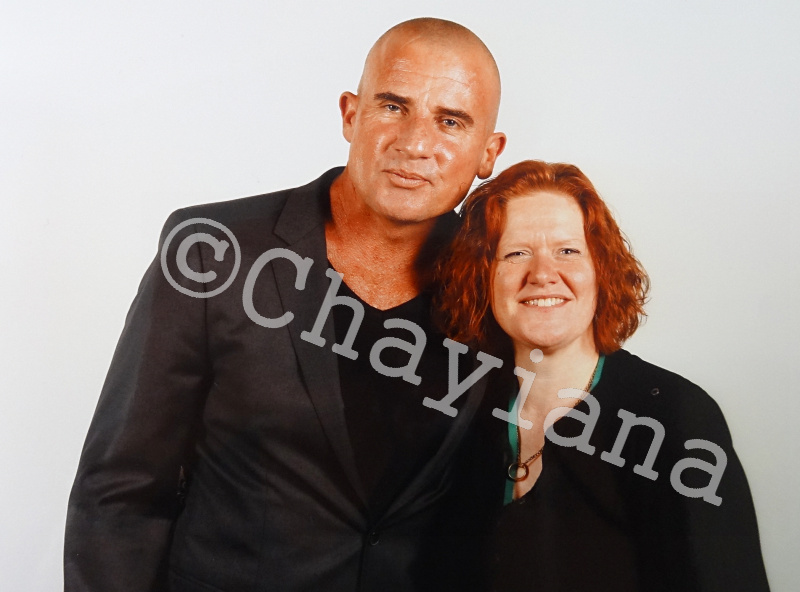 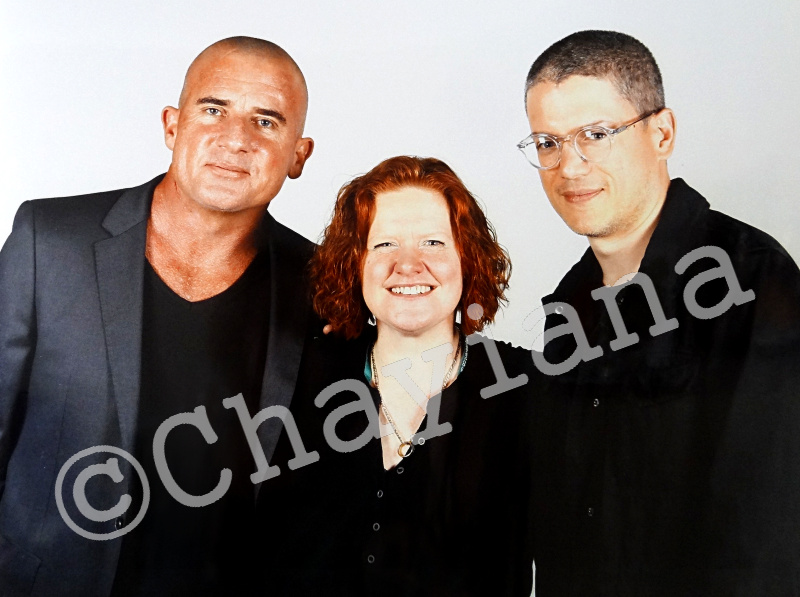 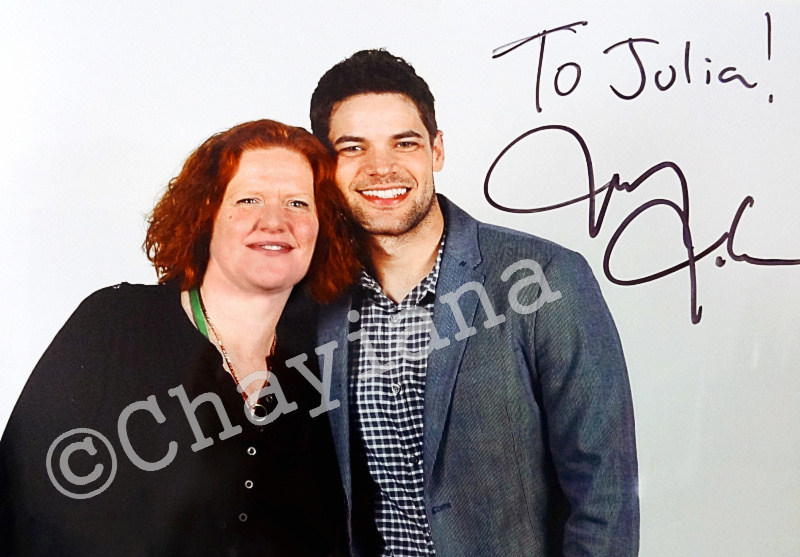 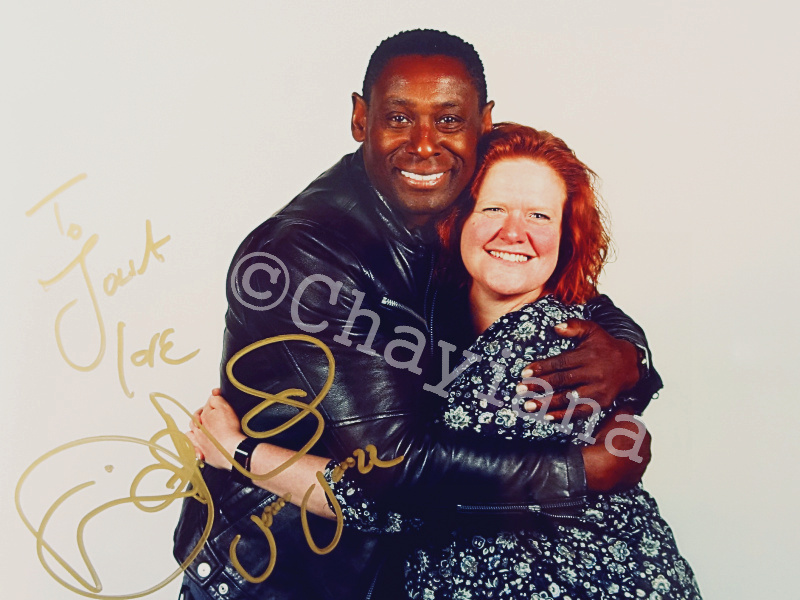 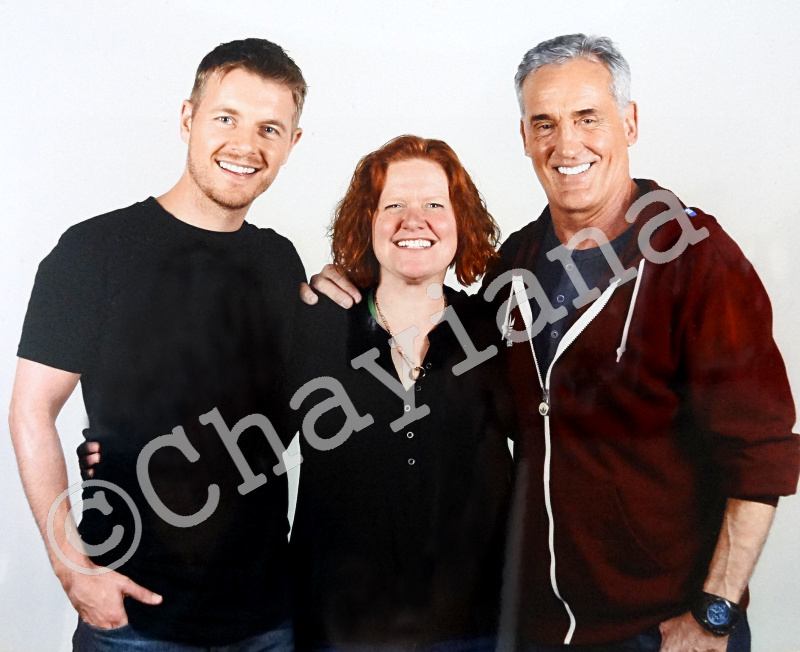 And it gets better... 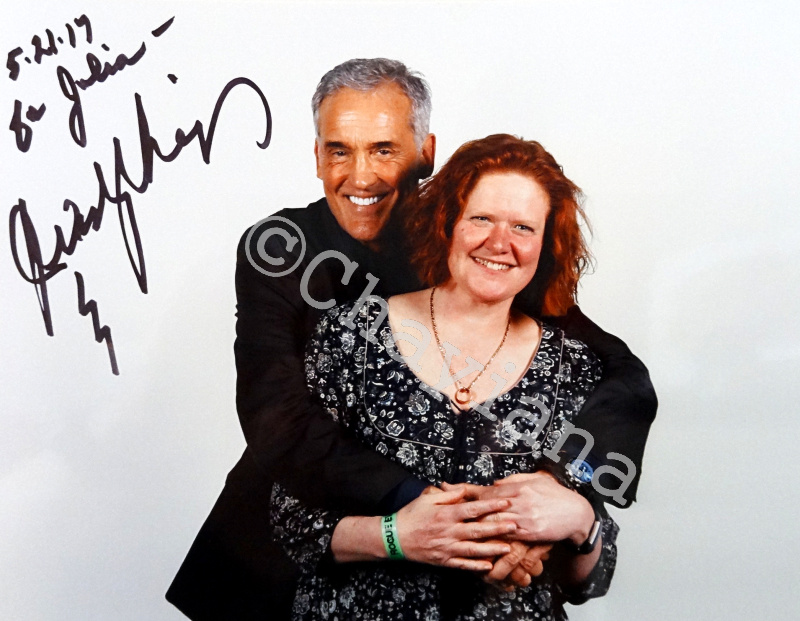 After I got his autograph I bravely asked for a hug (he was just so lovely I couldn't help myself *g*), and he stood up, came around the signing table and gave me a hug, a real proper hug, like you'd hug someone you know for ages. That was just so... ♥♥♥! And he also asked me to send him this picture via Twitter. Not sure why, but well, I did. ;)

And I saved the best for last... 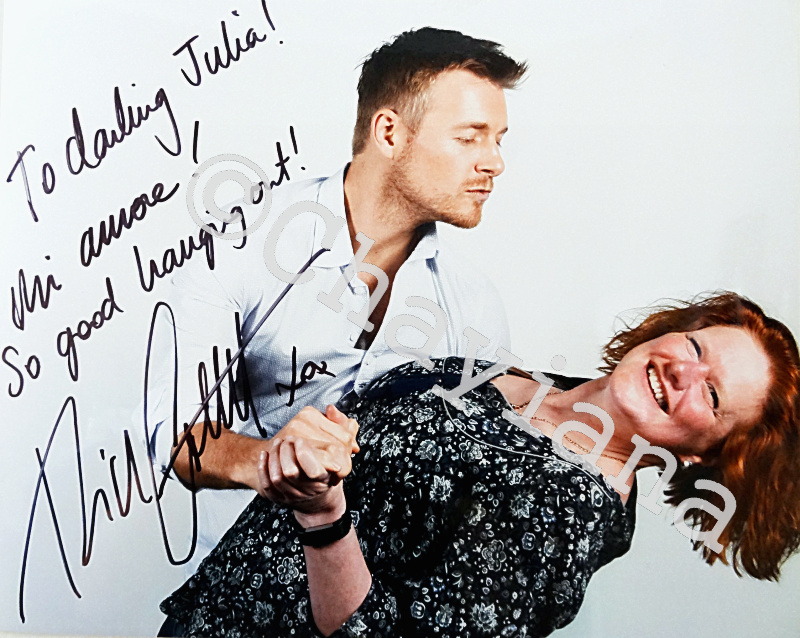 While queueing for his photo shoot it became clear that Rick would do almost anything you asked him for. There were two women (a bit older than me) who asked him to do a handstand, which he did while they were grabbing his legs. :D Or that picture when he took some of the very long red hair of a girl and laid it around his own head so he became a red head, too. Hilarious! *lol*  I honestly don't know who had more fun... he or us. :P Anyway, because I already had that lovely duo shot with him and John, I just wanted to do something special as well, I just didn't know what, until a girl behind me suggested a dancing pose. I thought: "Sure. I can do that." But what I meant, when I asked him, was a normal dancing pose... certainly not this! It was all his idea to grab me and do this Tango-whatever-thing. O_O *lol* Afterwards, I was told that he looked at the camera while the photographer counted down and only turned his head in the very last moment to look at me like this. ♥♥♥


In the end, this convention wasn't the nightmare I was afraid of... far from it! I really enjoyed myself, and I had a very lovely time with

donelbo again, which is always nice even when he is mostly too busy to have a proper chat. ;)


Well, I think that's it. I could probably tell you even more, but this took quite a while to write and I'm pretty sure I mentioned before that con reports aren't exactly my forte, so, you'll have to live with this. *lol* But if you have any question, ask away! :)

The only thing I ask of you, is this: Please do not take my personal pictures anywhere else. You may take the collages as long as you leave my name on it or comment and credit me if you'd like to use them otherwise. Thanks! :)
Tags: convention, izombie, supergirl, the flash
Subscribe